Get Their Names Out Of Our Mouths!

PSALM 16:4
Their sorrows are multiplied who seek after Gods (elohim)! We offer not their blood gift! We do not say their names!

EXODUS 12:2
This Moon shall be your beginning of Moons; it shall be the First Moon of the Year to you.

Your Book of Yahweh or whatever version you may have, I have checked seven, and they all say the same.
Get the names of Gods out of your mouth. Don’t give honor to the Gods.
The King James Version and some others add the word other to deceive you into thinking that Yahweh is a God or just another evil God.

GENESIS 3:5
For He knows that in the day you eat of it, your eyes will be opened, and you will be as Gods (elohim), knowing Righteousness and evil.

GENESIS 3:1-5
1 Now the serpent was more subtle and crafty than any beast of the field which Yahweh had made. And she said to the woman; Has Yahweh indeed said: You shall not eat of every tree of the garden?
2 And the woman said to the serpent; We may eat the fruit of the trees of the garden;
3 But of the fruit of the tree which is in the midst of the garden, Yahweh has said: You shall not eat it, nor shall you touch it, or you will die.
4 And the serpent said to the woman; You will not surely die.
5 For He knows that in the day you eat of it, your eyes will be opened, and you will be as Gods (elohim), knowing Righteousness and evil.

Did you notice Satan and the Gods teach against Yahweh and His Righteousness? They even lie to mankind saying “you won’t die”.
To that Yahshua Messiah said:

YAHCHANAN 8:44
You are of your teacher who is Satan the devil, and whatever she who is your teacher desires, you will do. She was a murderer from the beginning, and remained not in the Truth, because there is no Truth in her. Therefore, when you speak your falsehoods, you speak her words, because she is a liar, and the teacher of all lies!

I YAHCHANAN 3:4, 7-8, 10
4 Whoever commits sin, transgresses also the Laws; for sin is the transgression of the Laws.
7 Little children, let no man deceive you; he who practices Righteousness is Righteous, just as He is Righteous.
8 He who practices sin is of the devil, for the devil has sinned from the beginning. For this purpose the Son of Yahweh was manifested; that He might destroy the works of the devil.
10 In this the Children of Yahweh and the children of the devil are manifest. Whoever does not practice Righteousness is not of Yahweh, and he does not love his neighbor!

Did you see that? By practicing sin, you belong to Satan.
Satan is also the adversary of mankind. She is trying to prevent mankind from achieving the goal that Yahweh set for him in:

GENESIS 1:26
Then Yahweh said: I will make man in My Image, according to My Likeness; they will have Authority over the fish of the sea, over the birds of the air, over the cattle, and over all the earth and over every creeping thing that creeps upon the earth.

PSALM 8:1-6
1 How excellent is Your Great Name in all the earth, Yahweh our Father! You have Your Glory firmly set above the starry frame; the heavens.
2 From the mouths of babes and sucklings strength by You is ordained, so You would still the enemy; the avenger would be crushed!
3 When we consider Your heavens, the work Your Fingers framed, the work of the moon and of the stars, which were by You ordained;
4 What is man that You are mindful of him? And the son of man, that You visit him?
5 For You have made him a little lower than the malakim, but You will crown him with glory and honor.
6 You made man to be the ruler over the works of Your Hands; You will put all things under his feet;

Sin cuts you off from Yahweh.

ISAYAH 59:1-2
1 Behold, Yahweh’s Hand is not shortened, that it cannot save; nor His Ear heavy, that it cannot hear.
2 But your own iniquities have separated you from your Father; and your own sins have caused Him to hide His Face from you, so He will not listen.

Did you notice your bible says you will die if you allow these God-worshipping religions to pull you into sin? Sin is the breaking of one or more of Yahweh’s Laws. Practice sin and you belong to Satan. Remember I Yahchanan 3:4, 7-8, 10.
They have the whole world deceived into this evil God worship. It’s my job, and yours, to wipe out God worship.

REVELATION 12:9
And the great dragon was cast out, that old serpent, called the devil, and Satan, who deceives the whole world. She was cast out into the earth, and her angels were cast out with her.

They have all gone the way of Cain.

YAHDAH 1:11
Woe to them! For they have gone in the way of Cain, have run greedily in the error of Balaam for reward, and are sentenced to the perishing in the rebellion of Korah!

I YAHCHANAN 3:11-12
11 For this is the Message that you heard from the beginning, that we should love one another.
12 Not as Cain, who was of that wicked one, and murdered his brother. And why did he murder his brother? Because his works were evil, and his brother’s were Righteous.

I YAHCHANAN 3:15
Whoever hates his neighbor is a murderer; and you know that no murderer has Eternal Life abiding in him.

When we show honor to Satan or the Gods, we show dishonor and rebellion to the Creator, Yahweh.

Yahweh sets His Calendar using the sighting of each New Moon as the first day of the new month. Listed below is a chart showing each of Yahweh’s New Moons and the world’s calendar months (directed to God worship) that Yahweh’s Moons correspond with. Please note that in our calendar Yahweh’s Moons were not given the Babylonian names used by the Hebrew people. Through Yahweh’s Inspiration, His Moons have been given names of the Righteous. 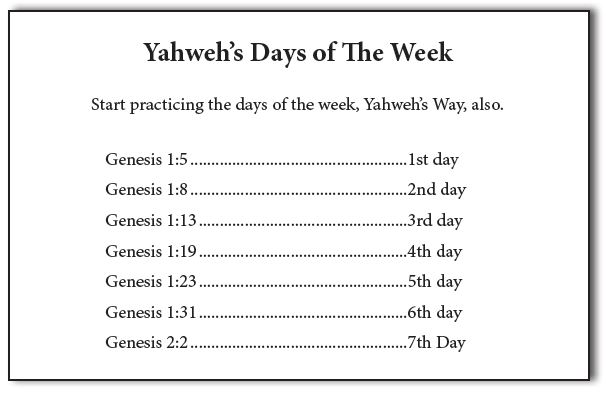 Now that you know about Yahweh’s Great Inspired Calendar – here you can download it or read it!

Due to COVID-19, shipping to some overseas countries has been temporarily suspended. If you have any questions or concerns please email us at info@yahweh.com or follow the link to see if your country is affected https://about.usps.com/newsroom/service-alerts/international/welcome.htm Dismiss